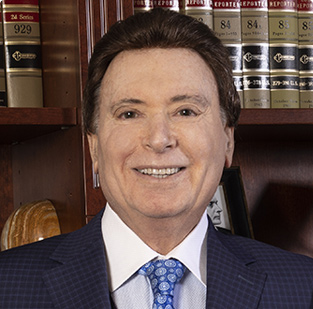 Lenard Leeds is a litigator with over 30 years trial experience who has handled hundreds of trials and administrative proceedings. He is senior partner in what Newsday has called “probably the best civil rights firm in the country“, and has been featured in the NY Times, NY Law Journal, Newsday and Long Island Business. He has appeared as a legal expert on dozens of television and radio shows including The Today Show, NBC News ,Good Morning America, 20/20, ABC News, CBS News, Anderson Cooper 360°, Nancy Grace, Your World w/ Neil Cavuto, Hannity & Colmes, NY1, and News 12.

He has represented celebrities and sports personalities such as Anna Nicole Smith, Peter Max, Jackie Mason, Jay Black, and has conducted significant cases in the areas of employment law, estate law and matrimonial law.

Mr. Leeds became one of the region’s first attorneys to practice workplace discrimination and wrongful discharge law. His firm has successfully represented hundreds of employees on Wall Street and Main Street who have been discriminated against based on age, race and sex. He has been counsel to prevailing plaintiffs in cases involving academic freedom and first amendment protection.

Leeds has been involved with some of the largest estate and contested probates in the NY area. He has set aside wills in Nassau County, Queens County and Westchester County. As reported by Newsday, one of Leeds’ trial victories “was the first time a Nassau County will has been successfully contested in a trial in 10 years, according to Nassau Surrogate C. Raymond Radigan, who noted that [in the prior] year there were only three probate trials in the entire state.” In another case, Leeds was successful in obtaining millions of dollars for the beneficiaries of one of the largest estates probated in Nassau County. The ancillary litigation involved accounting and fraud proceedings with respect to a billion dollar co-operative conversion.

Leeds has written articles in various legal publications and has been an editor of the Nassau Lawyer, and a contributing legal editor of the Long Island Press and Long Island Business News. He has also been an adjunct Professor of Law.